The contextualization of Wisdom Literature in the 7th and 8th Centuries:
An Inter-textual and Stylometric approach to the book of Proverbs
(Including précis of Canticles, Qohleth and Job)

"To understand a proverb, and the interpretation; the words of the wise, and their dark saying". (Prov 1 v.6) (See page 7 for the complete commentary in PDF format)

The contextualization of Wisdom Literature in the 7th and 8th Centuries:
An Inter-textual and Stylometric approach to the book of Proverbs
(Including précis of Canticles, Qohleth and Job)

Biblaridion media presents A New Commentary on Proverbs called Dark Sayings that augments the labours of previous scholars whose work has largely been unrecognised and who correctly identified the importance of a 7th and 8th century setting and the rise of Assyrian power as the background to the development of biblical sapiential literature. Unfortunately their work has largely been ignored within wider scholarship. Dark Sayings serves as a corrective on this neglect because understanding the correct historical setting also allows the correct exegesis of many poorly understood wisdom writings. The "axial" age of the 7th and 8th centuries resulted in a proliferation of wisdom writings and this axial age is as important to the composition and development of old testament scripture as the early monarchial and later post-exilic periods. Stylometric-linguistic tools and inter-textual methodologies are employed to analyse the relationships between Isaiah, the northern prophets and the wisdom writings. Proverbs (and many other wisdom writings) can only be correctly understood within the socio-historic context of the Assyrian crisis. The relationship between all the wisdom books and this critical “axial” period is examined – Qohleth, Job, Canticles and Proverbs were all composed between the reigns of Uzziah and Josiah with particular emphasis on the reign of Hezekiah. An overview of the main subjects examined in the commentary: Sections of the commentary are verse by verse for example a snapshot of chapter 14 verses 9-10 (below). Note how these proverbs are based on Hezekiah as portrayed in Isaiah. The commentary employs statistical techniques such as PCA and LDA and devotes a chapter demonstrating how the methodology is applied. For example, the scholar Skladny, by using analyses of form, content, style, and by employing statistics to quantify his findings, further delineated smaller sub collections in Proverbs: A (=10-15), B (=16.1-22:16), C (=25-27) and D (=28-29). This analysis conformed in part with the obvious editorial notices of the book’s structure in 10:1; 22:17; 25:1, 30:1. The following plot replicates the work done by Sklandy and achieves a similar result by employing the groupings identified by Sklandy in a supervised LDA analysis on a POS (Part Of Speech) tag dataset (see the plot below). The files can be downloaded using the hyper-links embedded in the commentary or directly via the Zipped folder below. The Zipped folder contains the following files (snapshot): 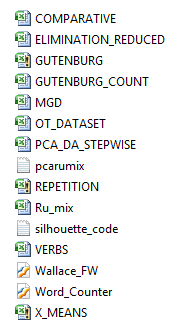 Chinese Christian Bible Study And Commentary Website:
Excellent website that has links to 64 commentaries on Proverbs
Commentaries downloadable in PDF and DOC formats

The Relationship between Textual Criticism, Literary Criticism
and Exegesis – An Interactive One?
[Textus24 (2009) 119-132]
Johann Cook

Recensional Differences between the Masoretic Text
and the Septuagint of the Book of Proverbs
pg. 419-432 in The Greek and Hebrew Bible:
Collected Essays on the Septuagint, Leiden: Brill, 1999
E. Tov

Was an Early Edition of the Book of Kings
Composed during Hezekiah’s Reign?,
Scandinavian Journal of the Old Testament, 31:1, 80-91 (2017)
Nadav Na’aman

Bel and Nebo and the man from the East
Is Deutero-Isaiah (40-55) later in origin than the preceding chapters? Is Cyrus read into the text?
Paul Wyns